Any Thing Worth Doing

When I read it, I did a double take: Anything worth doing the motto began, is worth doing poorly.

I thought, if anything’s worth doing, it’s  worth doing right!  (The 4th Earl of Chesterfield)

Yeah — maybe that explains why it took me so long to do a proper Fifth Step.

That, and I believed it just wasn’t right to hang out all the dirty linen I discovered making a searching and fearless moral inventory. (The 12 & 12, page 56)

Never bothered me, though, what others might think of me when I was drinking!

Not to mention,  it took me a couple of bites at the Fifth  Step to understand what the  step said:

Admitted to God, to ourselves, and to another human being the exact nature of our wrongs.

The Step doesn’t say: just dump the inventory on somebody  . . . although admitting all my”stuff” to a sympathetic soul was freeing beyond anything I could have imagined.

No — it makes a distinction: my inventory and the exact nature of my wrongs are unique; think about why there was so many . . . issues?(!)

Could it be that I was the common denominator in all the pain, problems and predicaments my inventory revealed?

Well, when I finally admitted to myself, and to God the exact nature of my wrongs, nine times out of ten . . .  there I was: an egomaniac with an inferiority complex; a slothful perfectionist; a cowardly critic; self righteous and self loathing JUDGE of everybody but me! (Poor Me!)

Working the first four steps, as someone colorfully said, I got my (expletive deleted) together, but it was too heavy to lift, so I put off the Fifth Step.

But the point of Step Five is we don’t take it alone. Nor, do we take it in the company of unsympathetic judges. This isn’t an audition for America Idol!

The Fifth Step is a step into community and out of the isolation tank  I created with  drinking and alcoholic thinking.  It’s a way to dispose of all the out-date junk our Forth Step inventoried. (The 12 & 12, page, 57-58) And I’ll get to do it again — not to do it right, but to do it because it is so worth taking!

Therefore,  anything worth doing is worth doing poorly because doing it poorly is better than not doing it at all! 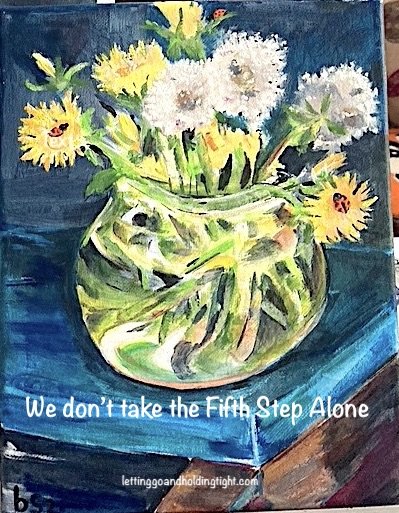 Thanks for bearing with me, dear reader — How is your now, by the way?