Relapses: A Necessary Topic at An Anniversary Meeting

A Good Topic for Anniversary Meetings

Because the celebrant at a recent anniversary meeting chose the topic, I’ll throw it out for discussion: RELAPSES.

It was a sobering topic, because sobriety is a daily gift, that some of us have trouble receiving and seeking. Because Alcohol is cunning, baffling, and powerful, it tries to persuade me one drink isn’t going to kill me.

So, a relapse can be a teachable moment – helping us examine our motives and priorities to see if they are sound and in order. (A New Day, page 220)

But early on, the death of two program acquaintances highlighted the unintended consequences of relapsing. Their deaths made a big impression – I think of them, especially when stinkin’ thinking wafts through my brain.

My relapses happened before I accepted my alcoholism. I could go for periods without drinking – once for forty days; mostly though I only lasted for a few days trying to prove to myself I could take booze or leave it.

But, I always wound up taking it.

I came to AA through Al-Anon’s doors.

I wanted to stop the one I loved from drinking. I was looking for  three things to do and four things to say that will make them stop drinking.

What I found was people who believed God was real. They believed God was involved in their lives and the lives of those they loved: some whom were in recovery; many who were still out there. They suggested I could borrow their God, until I found a Higher Power of my own.

I found Him through watching them, and attending Bible Study Fellowship. I discovered He was searching for me!

God showed me that alcohol was my problem, and the one I loved, who was still drinking, was His. He gave me the courage to change my own behavior, and stay on my side of the street – working with Him and my new AA sponsor to sort through my issues.

Ignoring issues will lead to a relapse, or a dry drunk.

So, I have come to believe what I was told early on of my daily choice: You are either working on your program, or you are working on a relapse.

Yesterday, I did not pick-up, and that shows me the miracle, I can choose not to drink today. You can too!

And tomorrow will take of itself, because God is already there. 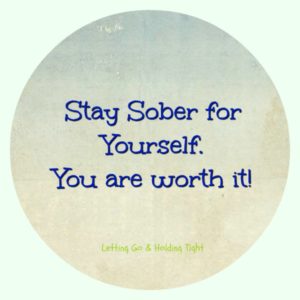