Step One: Defeated But Enjoying a Daily Reprieve

Celebrating then Taking Step One

Right after celebrating an anniversary, reviewing Step One makes sense. So, opening my 12 & 12, I also see it is an annotated copy, filled with good stuff that I heard at the meetings – other people’s experience, strength and hope.

Right off, is a question that keeps me right-sized, and opens the door to recovery.

Admitting a daily defeat earns me a daily reprieve.   Not a bad exchange.

I remember that night when I realized the friend I thought alcohol was, loomed up like an enemy who was going to show me no mercy. I had seen what alcohol did to people I loved. Alcohol flipped them right on their rear ends.  And they kept going back

I thought I was different. 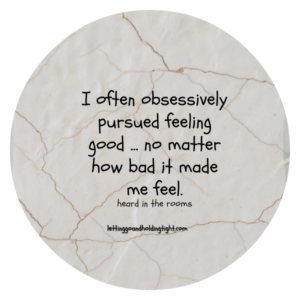 I fancied myself as one friend  described themselves: Yeah. I was somewhere between a high-bottom drunk and the gutter. I did not hit the bottom others warned me was coming. But, the bottom I hit was a hard enough collision.

Until that night, when I caught a glimpse of alcohol as a huge, sweaty sumo wrestler who meant to knock me out, I wasn’t seeing myself as that bad. (See page 23 of the 12&12.)

. . . years before we realized it we were out of control, that our drinking even then was no mere habit, it was indeed a fatal progression.

Thank you God when I wondered if I were an alcoholic, nobody ever suggested I try some “controlled” drinking.

My obsession to prove I could drink like everybody else was about to flip me out of the ring, like a sumo wrestler does to his opponent.

What social drinker have you ever met who is determined to prove they can handle alcohol?  A true truth: we’re all here because we’re not all there.

I don’t know where you are, dear reader, in your journey: Wondering, worried or still wrestling with booze. Mine is far from the only recovery story.

Let me  quote what a wise old Indian chief said during a meeting. It may help you decide about taking Step One.  Whether or not I am an alcoholic, I do know my drug of choice is control.

Like I heard in the rooms: After you take the first drink, you know what follows.  Yep, I had written several chapters in that story. I can’t change those chapters, but together we can change the ending.